A planning application was submitted in September 2014 for 12 Turbines to be situated adjacent to the Scout Moor wind farm. A proposal by Peel Holdings was also considered for the expansion of Scout Moor; however, the two applications were separate with the majority of the turbines on the Scout Moor expansion being to the north of Rossendale Council land.

The wind farm application for Rooley moor was for twelve turbines. As part of the application there were plans to remove the asphalt and concrete that had been used to repair Rooley Moor road in the past and repair it properly with granite sets.  Regrettably the application was turned down in mid-2015 by Councillors sitting on the Planning and Licensing committee of Rochdale Council. This was disappointing and meant a loss of the economic benefits that would have accrued to the community as well as the proper repair of Rooley Moor road.

Rooley Moor Road has long been an iconic view to the north of the town and the application plans had recognised this. Horse riders, mountain bike riders and walkers had their existing and future needs incorporated in the planning application as well as a robust proposal to protect the environment from illegal moor use. This last problem remains an ongoing problem, but now with much community support to try and eliminate it, for which the Manor is grateful. 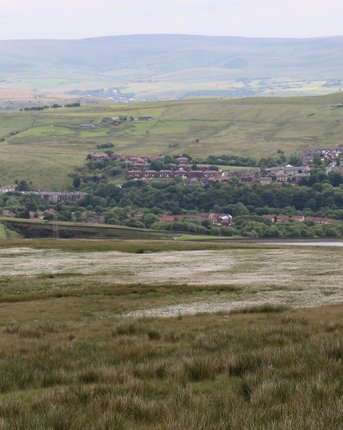